Within walking distance from our place, you can visit famous archaeological sites and places and explore beaches of immeasurable beauty with crystal clear waters. We suggest you below some of them and provide you relevant information. 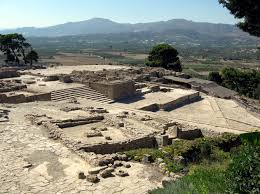 Phaistos was the second largest Minoan City in South-Central Crete. Mythological the construction of Phaistos is connected with Mino’s brother, Rhadamanthus. His dynasty reigned in Phaistos. Another version said that Phaistos was founded by the son of Hercules. The first palaces were built around 1900 BC and destroyed around 1700 BC. Immediately after their destruction they ware build new even more imposing and more luxurious then before. In the 15th century BC a new disaster flattened all the Minoan Neopalatial centers across Crete, included Phaistos. The view from an altitude of 100 meters will enchant you with the panoramic image and the imposing mountains of Psiloritis, Asterousia and Lasithi. Especially in the evening hours, the view is breathtaking.

The beach at Matala: 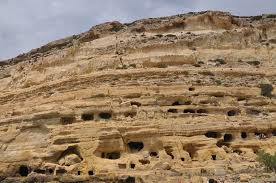 A popular destination for visitors of Crete is Matala. Matala became famous in the sixties, when the hippies arrived from all over the world to live in the caves of Matala situated on the beach. Here you can enjoy a swim or even exercise. For guests who love sports, there are sports facilities on the beach as well as activities for children. Finally, in there are additional facilities with first aid, toilets and showers. 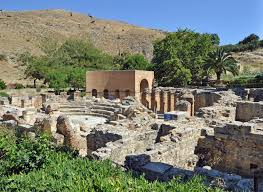 Forty five kilometers south of Heraklion, Gortyn is one of the most important cities of Crete and one of the largest archaeological site in Greece. You can visit and admire the archaeological finds and discover its history. The name comes, according to the most talked-about version, by Gortys, son of the King of Phaistos Rhadamanthus. Another version claims that the founder of it was the Gortys and for that got its name. The third version tells us that the city was founded by the Queen of Crete and mother of the kingdom Taurus, Gortyna. There is a legend of Greek Mythology that says Zeus fled to Gortyn, when transformed into a bull kidnapped Europe on his back and just below the Sanctuary Platanos took human form. From the relationship of Zeus with Europe were born the kings of the three Minoan Palaces in Crete. http://www.incrediblecrete.gr/26/index.en.html 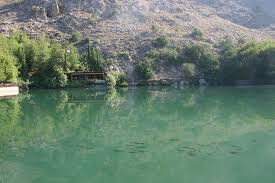 A small wetland was created by the crater of the source Votomos by the end of the 80s, just north of the village of Zaros, right at the base of the mountain. In 1987 they created a small artificial lake there with the interventions of the Forest Service. Nowadays the lake and the area around turned out to be one of the major forest recreation areas of the island. The lake, the green area, they attract visitors from all over the world. 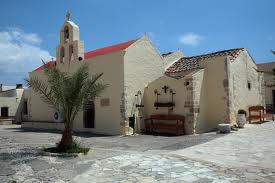 The Holy Monastery Of Odigitria is located in the Southern part of the prefecture of Heraklion on the massif of the Asterousia Mountains and is one of the oldest monasteries in Crete. The monastery was built in the 14th century and was surrounded by a wall. Some parts of this wall are preserved even up till today. Inside the Church you will find holy vestments, unique murals, an icon screen of the church painted by the famous Angelou, and more. The Odigitria Monastery also played an important role in the liberation Fights. The Monestary protected not only the preservation of the Orthodox faith, but protected also the population from the Ottomans. Today the Monastery still exists with monks and is working properly. The peace and serenity of the soul that someone feels when visiting the Monastery of Odigitria cannot be described by words. Without doubt, definitely worth your visit. http://www.imodigitrias.gr/ 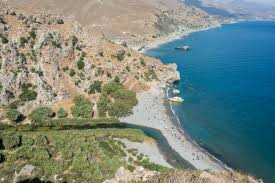 Agiofarango is located in the prefecture of Heraklion, between the Monastery of Odigitria and the village of Kali Limenes. Agiofarago was the first center ascetic Bios from Crete and goes back to the first Christian period. The gorge was used by many hermits. They choose to live as ascetics in this isolated location, far away from the residential areas. This explains also the origin of the name ‘Agiafarango’. When you cross the gorge you will reach a beautiful beach overlooking the Libyan Sea.